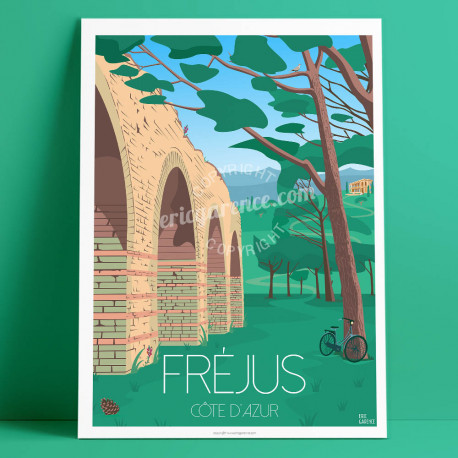 Founded in the year 49 BC, the Roman aqueduct of Mons Fréjus is 42 km long and 481 m vertical. It also reveals 36 arches that were made in 20 years of construction. It is a building telling the Roman imprint in France. Formerly, the aqueduct was used to supply the city with water, today it is an essential driver for tourism on the Côte d'Azur. A vestige of architecture which was a source of reflection, sometimes even of inspiration for many writers such as Victor Hugo. It is therefore from the same postulate that the artist Eric Garence decides to make it the main subject of a work. The designer takes up the aqueduct, a Fréjussian symbol in a Neo-Retro style that you can admire on posters and other formats.