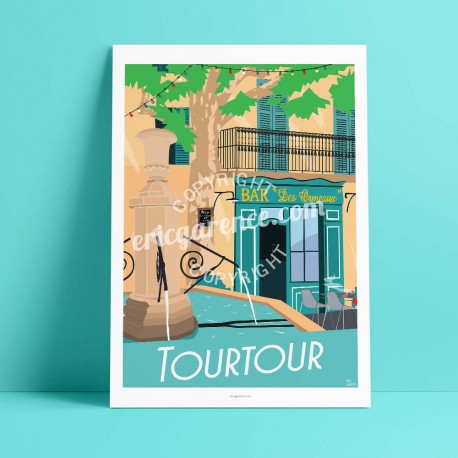 Art illustration part of the Provence series edited in 2017, this original poster is signed by Eric Garence and is about Tourtour.

Tourtour is called "the village in the sky of Provence" because it overlooks a large part of Provence from the town of Fréjus along the Mediterranean coast in the east to the Montagne Sainte-Victoire. Tourtour is also a place very frequented by famous people, Francis Ford Coppola, Sofia Coppola, Thomas Mars, Thierry Coste, Maria de Faykod, but also Jean Marais, Bernard Buffet, Raimu some years ago !

In this artwork you can see the famous Tourtour place with its old fountain, just behind at The Bar "Des Ormeaux", two odorous coffees await for their owners.