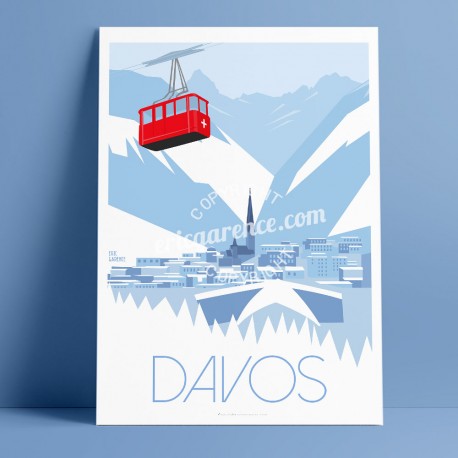 Art illustration part of the series devoted to Switzerland. Edited in 2018, this original Eric Garence poster shows one of Switzerland's most famous ski resorts in the canton of Graubünden: Davos.

Davos is known for hosting the World Economic Forum (WEF) but also as a winter sports resort, hosting, for example, the Spengler Cup in ice hockey.

Located in the Landwasser Valley, Davos consists of two entities: Davos-Dorf and Davos-Platz, the Wolfgang Pass connects it to the Klosters station. Davos is also known as the highest city in Europe at an altitude of 1560 meters.

Artworks of this artist are available exclusively on our website and in partner galleries.