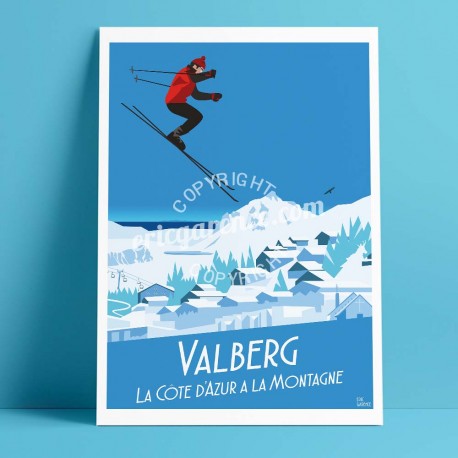 Poster Valberg, the French Riviera at the Mountain, 2017

Art illustration part of the Côte d'Azur series, published in 2017 this original poster represents the station both authentic and sporty Valberg. Among the symbols that are hidden there are. On the left: the central square Charles Ginesy with the Swiss chalet, the toboggan run and the chairlift of the Garibeuil, as a tribute to the first lift of the Alpes Maritimes installed in 1936 in Valberg. In the background: The Chaîne du Saint Honorat with Lake Beuil or the Senator's Lake according to his preferences. In the sky: The Bearded Gypaete, one of the largest and rare raptors of Europe, reintroduced into the mercantour since 1993. On the Right: A Chamois, historical native of Mercantour and Notre Dame des Neiges

2 other products in the same category: