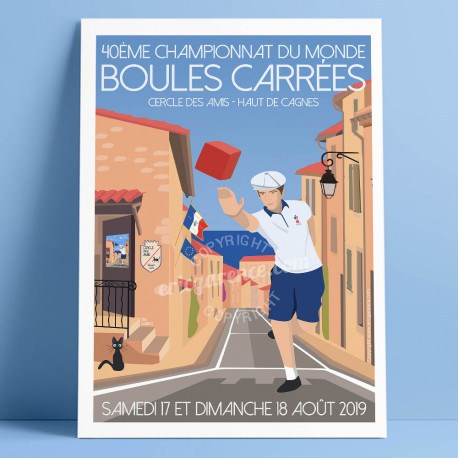 Collector's poster part of the Côte d'Azur / Cagnes sur Mer series. Produced in 2019, this poster was created for the 40th World Championship of square balls that takes place each year in the village of Cagnes-sur-Mer .

We find the deep blue of the Bay of Angels on which is cut the Grimaldi Castle Museum of Cagnes sur mer. On the left a huge Bougainvillea in bloom comes to brighten the Montée de la Bourgade Haut de Cagnes in which is held every summer on famous World Championship Square Balls. In the center, a fierce game of petanque between blue square balls and red square balls intrigue Arthur the little black cat from the top of cagnes.