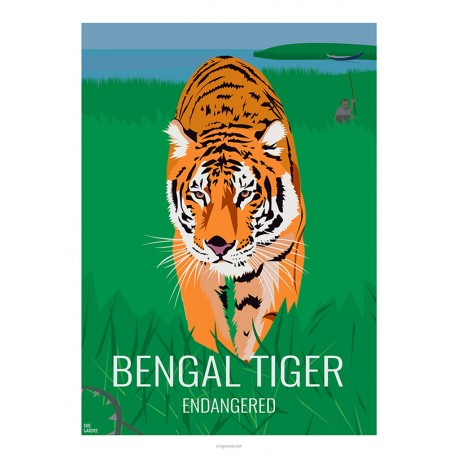 Like the Barbarie Lion, the Bengal Tiger and his cousin the Caspian Tiger were the poster heads of the Circus Games in Rome. If there are still some specimens of Bengal Tiger, 1706 in 2010, the Caspian tiger died in 1972.

Spread between Bangladesh where there are approximately 150 left and India about 1400, the Bengal tiger faces multiple threats that weigh on his fate.

Mostly threatened by poaching, at his home almost everything has a financial value for the traffickers, his skin, his penis, his teeth, his claws, his meat are appreciated by the traditional Chinese medicine, his bones go until being used to make some tiger bone wine ... Some advance the price of 150,000 € for a wild tiger carcass.

The Tiger is also a tourist attraction, the Buddhist temple of Kanchanaburi in Thailand had understood, the monks trainers have owned up to 147 tigers. Faced with suspicions of trafficking and abuse (especially to allow tourists to make selfies), the associations intervened and the government took responsibility by transferring the big cats to national parks.

In Banglasdesh it is the disappearance of its natural habitat with the rise of the waters especially in the Sundarbans islands in the south of Bangladesh which seriously threatens its survival.