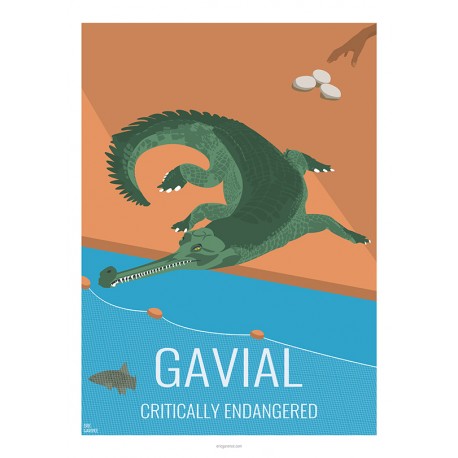 The Gavial appeared 150 million years ago. In 2016, there were 220 breeding specimens in the wild.

On this poster you can observe a Gharial Gharial at the edge of a waterhole. This crocodilian is a freshwater aquatic crocodile, the largest in the world, a very good sinner and swimmer who is dependent on the rivers. The quality of the water and fish it contains is therefore vital.

In the bottom left, a Rohu, carp of the Asian regions, is caught in the nets of a fisherman which deprives the Gharial of a meal. Symbolizing the helplessness of the Gharial in front of the protean exploitation of the rivers by the man, the crocodile is the direct victim of the unreasoned exploitation of the rivers by the Man. Victim also diversions of rivers that force the populations of Gavials to move, even though they have great difficulty to move on land.

To this day, the pollution of the rivers, which remains a major problem in this part of the world constitutes the biggest threat for the Gharial.

Reintroduced thanks to a vast and ambitious program of reproduction, the populations of Gavial remain very very fragile, as evidenced by the 2007-2008 hecatomb in the river Chambal where an epidemic of Cirrhosis has cost the life to about 113 Gavials.

A story tells that the people did not go to the places where the gharials nested because the bandits established there their lair, today the man advanced, secured the territories and thus moved at the same time bandits and Gharials, if some have found other haunts to meet, others died.

The icing on the cake, for this rather unlucky animal after 150 million years spent on earth (which corresponds to the time of the appearance of birds), it is its eggs that are the main ingredient of 'a traditional dish consumed by tribal people ...

no house, no food, no children ... that inevitably complicates life ...

Obviously, it is also very sought after for its skin, its hump at the end of the muzzle, its fat and its penis, which, as for most wild animals, have all sorts of proven or unverified virtues.